A Child’s Requiem
Documentary:  On December 14, 2012, images of the Sandy Hook Elementary School 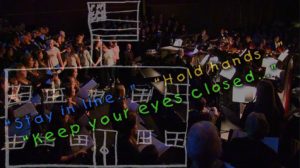 shootings in Newtown, Connecticut dominated the news. Chief among them was the photograph of a line of children being led out of the school to the nearby fire station. From the time I considered writing a piece to commemorate these children and their teachers, three lines suggested themselves and haunted me recalling that picture: “Stay in line…” “Hold hands…” “Keep your eyes closed…” Composer/conductor Steven Sametz knew these would be the first intoned words of A Child’s Requiem.

This Block also includes the Documentary Short:  Old Men Singing
After losing touch for more than 50 years, the men of a collegiate a cappella group reunite on campus to reminisce, settle old scores and find out if they still have what it takes to perform together in this documentary short about the enduring power of music and the families we choose.