A small town is overcome by a massive underground coal fire in 1962. After many failed attempts by the government to put out the fire, it grew larger and moved beneath most of the town. As a result hundreds of residents had to be relocated. By 1993, under governor Casey, eminent domain was declared forcing the remaining residents out of their homes.
Only a group of residents fought the 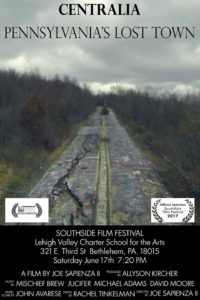 state and stayed. By 2013, a handful of remaining residents won their case against the state which granted them life estates in Centralia.

After the film, enjoy a great spread by Goosey Gander and mingle with filmmakers and other film enthusiasts starting at 9 p.m.at the Gander Room, 102 W. 4th Street, Bethlehem. Admission is $10 or free with an All-Access Pass; cash bar for everyone.